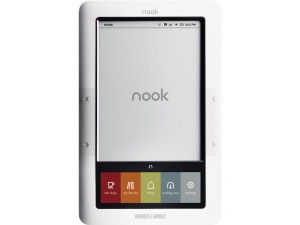 I received a Barnes & Noble Nook for my birthday this year (thanks Mom!) and have been playing around with it for a while with an eye toward reviewing it for this blog.  I don’t plan to make a habit of reviewing products here, but I am something of a gadget nerd and am interested in the ways that technology can enhance both teaching and research.

While tablet computers are probably going to represent the future of portable computing (thanks to the success of the iPad and the promise of Android and Microsoft-based tablets in the coming year), with the introduction of the B&N Nook for $149 (Wi-Fi only) and $199 (Wi-Fi + 3G) and the Kindle 3 (starting at $139), eBook readers now represent a much more affordable alternative for those who want a decent niche device.  And while the potential hasn’t been fully exploited, there’s value here for academics interested in paperless (and highly portable) research.

Let’s start with the obvious:  this thing weighs less than your average trade paperback and fits easily in a laptop bag or a purse.  I usually carry a small library with me when I travel, because being trapped on a plane or in a car without reading material is, for me, a fate worse than dental surgery.  However, I also tend to carry a lot of books with me when I go into campus.  I take whatever I need for class, plus the top 2-3 books that I will need for writing purposes on that particular day.  I frequently get bruises on my shoulders from the straps of my very, very heavy bag.  The thrill of carrying the collected works of Theodore Dreiser, writer of enormous 600 page novels, in a device weighing approximately 10 ounces, was something of a thrill this past week.

Also handy is the ability to browse and download books on demand with the (free) 3G connection.  While waiting for my bus, I was downloading (free) public domain copies of some of Twain’s more obscure works.  The matte e-ink display is crisp and easy to read, very similar to paper, in fact.  I can read outdoors in full sunlight without getting distracted by my own reflection and how bad my hair looks in the crazy heat and humidity we’re experiencing.

More substantively, the major advantage that Nook has over Kindle (and iBook) is its support of the .epub and .pdf format, which is becoming the industry standard for eBooks.  Basically, it means that you aren’t limited to the books that you can purchase through Barnes & Noble the way you are limited to Amazon through the Kindle.   The Nook can display any text that you download off of Google Books (and the search feature automatically searches Google Books and downloads them free of charge.)  Google Books has been a resource of indescribable value to me during my dissertation research, given that it houses an astounding collection of nineteenth century periodicals and early editions.  Thanks to the .pdf support, I was able to put all of the books I had previously downloaded onto my Nook.  I was also able to transfer JSTOR and Project Muse articles, though the conversion software for those documents leaves something to be desired and tends to introduce errors.  Let’s hope they get a software update for that right quick.

Also awesome is the fact that unlike iTunes, all of your eBook purchases are backed up online in case the device gets lost or breaks.  Even cooler is the fact that there are free Nook apps available for your PC, smart phone, or iPad.  So, instead of using Apple’s annoyingly proprietary iBooks app, you can access your Nook library on any device.  It even remembers what book you’re currently reading and where you are in it.

The .epub file format is also supported by many lending libraries.  Local libraries throughout the country are offering downloadable (time-limited) eBooks in .epub and .pdf format.  So, as I recently discovered, does the eBook distributor that my university library subscribes to, though said library does not have the “download for offline reading” option switched on (annoying).  What this means, however, is that there is enormous potential for research libraries to support .epub and .pdf compatible eBook readers.  One of my few complaints about Nook is the limited selection of scholarly titles, whereas subscriber services like EBL seem to have quite excellent selections.  Making lendable eBooks available on readers rather than just on personal computers would be pretty huge boon to both scholars and students and would solve the issue of whatever book I need at a given moment always being checked out to someone else, who probably has it on their bottom shelf and just keeps renewing it because they might need it again even though they’re not using it now, and then I have to recall the book, which takes two weeks, and….(natters on incoherently).